Raiffeisenbank is a top universal bank on the Romanian market, providing a complete range of products and services to private individuals, SMEs and large corporations via multiple distribution channels: banking outlets (more than 350 throughout the country), ATM and EPOS networks, phone-banking (Raiffeisen Direct) and mobile-banking (myBanking)

The company has initiated its digital transformation in reaction to the changing needs of its clients. To provide them a considerably better service, Raiffeisenbank decided to improve the way the bank’s employees collaborate and communicate. The first step on this mission was to move the bank’s social network, its document storage and sharing, and also its email services to Google Workspace, as well as improving the network access for mobiles using Android at work.

As we all know, the situation on the banking market has changed rapidly over the past few years. Nowadays, clients expect their banking products to be much more flexible and their accounts to be readily accessible. Where they once walked into one of the branches to deposit or withdraw money and check on their balances, they now use their laptops and mobile devices, from anywhere at any time of the day.

“We were eager to build our digital strategy to set out the direction the bank aimed to move. However, we knew that in order to change the way the bank cares for its clients, we first needed to change the way we work within the company.”

In 2014, Raiffeisenbank introduced its new values internally: two of them were “Simplicity” and “Collaboration”. Staff and managers feel a strong need to share knowledge, learn from each other, and truly collaborate. Google Workspace was chosen as the ideal tool to help people work more efficiently, collaborate in real time, and communicate better. Improving internal processes inevitably changes the client service too as the employees have more time to focus on things that really matter.

Real time collaboration, sharing the best practices, more efficient communication. Those are the key victories of Raiffeisen following the implementation of Google Workspace. Improved workflow had indeed the desired impact on the quality of customer service - tasks that require the involvement of a number of departments can now be resolved more quickly and efficiently. A great improvement can be observed in those cases where the IT department was needed in the past, such as in the creation of internal sites or surveys. After the transition, tasks can now be performed directly by users, freeing IT resources for potentially more important issues.

The fact that Google Workspace are easily accessible from mobile devices is naturally very convenient for the users. People love using their Hangouts! This way, they save money otherwise spent on travelling and travel-related costs. Hangouts are especially appreciated by the retail bank sales team where they replaced a number of face-to-face meetings, as well as by the HR department while interviewing candidates. The Google+ social platform has been identified as a useful tool for internal communication. During the rollout, a Google+ community called “Simply Coll@borate” was created to which employees were invited to share advice and tips on using Google. It quickly became the fastest and the most useful channel for seeking guidance on the new tools.

The transformation of whole the company to the new way of working was done in three months – only thanks to the collaboration with Revolgy (previously Netmail), the only Google Cloud Premier Partner in Central and Eastern Europe, a very experienced implementation specialist with an excellent track record in moving financial institutions to modern collaboration and cloud solutions. 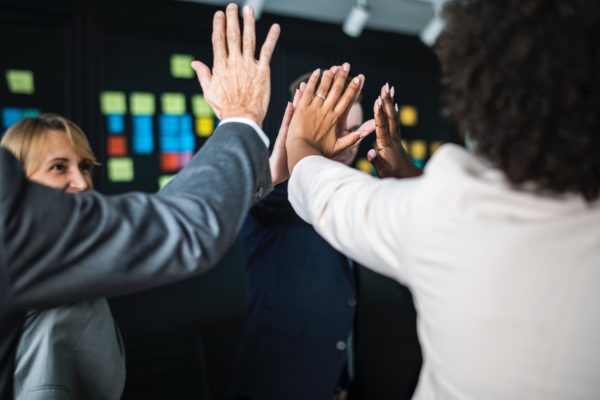 The Revolgy and Google approach towards the transition was based on the following two focus areas:

During the implementation, the joint Raiffeisen-Revolgy-Google team focused fully on both areas.

“I believe that our collaboration throughout the Google Workspace implementation was extremely useful for the entire Raiffeisen project team. As of Day One, we were part of a new way of working, a true online collaboration. It was challenging for us, but then it was so much easier to transfer our own experience to our colleagues,”

As banking is a regulated market segment and moving services to the cloud is quite an innovative approach, it was also essential to ensure that the transition to Google Workspace was in line with financial regulations and data protection laws.

According to Google and Revolgy's best experience, the whole process as such was split into three phases. The first phase focused on IT matters and involved primarily the IT staff. In the Early Adopters phase, 20 % of employees from across the organisation horizontally and vertically were involved, including all board members and most managers. More than 600 Google Guides, covering all departments and nearly all branches, became the change ambassadors of the project. Then, Google Guides were chosen as a group of engaged and motivated employees who could be helpful not only in the process of Google Workspace implementation, but also during the future changes or transformations. The business user feedback which was collected during this period was crucial for Global Go Live. On the Go Live day, all the employees went Google.

By the end of this period, all of the nearly 6,000 Raiffeisen employees had started using Google. Revolgy, Google Cloud Premier Partner, supported Raiffeisen all the way during the deployment of the solutions, using its wide experience from similar implementations.

After only one month of Global Go Live, some interesting use cases were implemented. The Project Management Office was the first department to shift all its work to Google Cloud. It now creates and shares Google Docs and Google Sheets in Google Drive, and builds monthly project reports using Google Slides.

Prior to Go Live, the Human Resources Department had gathered feedback on training and hiring by using paper forms or sending out emails that had generated only few responses. Now they use Google Forms to make data collection easier and more organized – like gathering suggestions for improving the quality of HR services. They are also replacing phone interviews with interviews via Google Hangouts, as meeting the candidates over video helps the hiring managers get more accurate first impressions. The retail bank sales team also uses Hangouts for sales meetings, saving travel time and related costs.

Modern transformation in a traditional medium

Summary What issues did the company deal with? Employees were not used to use modern technologies...

Innovation of Public Infrastructure through Migration to Google Cloud