This article is about the Cloud Run service on Google Cloud Platform. It will be of most interest to you if you're looking into services to run your application on - Cloud Run might suit you well. Whether you're anything from a beginner hobby developer or a full-blown development team lead, you might find this interesting.

Read some use-cases for Cloud Run, tips and tricks, pitfalls to avoid, and comparisons to other services.

Google's description of what you can do with Cloud Run is:

This service allows its users to simply deploy OCI containers, and those container services automatically scale up and down on demand, they are monitored and their outputs are logged, all automatically. The only thing the user needs to care about is the container.

What Cloud Run is ideal for

Cloud Run is absolutely perfect for the type of applications that tick all the boxes below:

Generally, such applications would be:

And if the extra boxes below are also ticked, it's just that much better:

What Cloud Run is not for

Aside from the exact opposites of the things in the "What Cloud Run is ideal for", there are both general and specific use-cases that are just not for Cloud Run at all.

Cloud Run vs. other GCP services

App Engine is a service that is way older than Cloud Run (2008 vs. 2019), and it also was, and, well, still is, a slightly different type of service, though they both are PaaS. App Engine was also the first ever Cloud service by Google - it's even older than Google Drive.

There are two types of App Engine: Standard and Flexible.

The App Engine Standard Environment is a runtime-constricted platform. Originally, in the First Gen, one could only deploy Python applications, but this was expanded with choices of Go, Java, JavaScript (Node.js), PHP, and Ruby in the Second Gen.

A file, called app.yaml, is the sole addition that needs to be made to a codebase of one of those languages. The file defines the runtime choice, environment variables, scaling, instance type (RAM, CPU), and path handlers (some HTTP paths can be served from a static directory), and the application entrypoint - by default, the entrypoint is main:app for Python 3.

While the Flexible Environment has a set of predefined runtimes just like Standard, plus .NET, it also has the option to supply a custom runtime via a Dockerfile.

There is, however, a slight difference between this and Cloud Run still: You still have to supply the app separately from the runtime; the major advantage of this is that you can have a stable runtime container that perhaps won't change that often that is completely separate from the application's code, and thus application developers cannot change the Container file, even if they'd want to.

Container VMs, or more specifically Compute Engine VMs running the Container-Optimized OS from Google, allow for configurations nearly identical to Cloud Run, with the underlying infrastructure being slightly more in the customer's hands, but with more customization options and a different price.

Now, what are MIGs? Obviously not the Russian MiG airplanes. MIG stands for Managed Instance Groups. Very simply, they're groups of VMs that can be connected to Load Balancers. Couple that with an autoscaler, which can change the amount of the instances based on metrics directly from the instances, such as overall CPU utilization, and you've reached the same kind of autoscaling that Cloud Run offers.

VMs do in general have a minimal cost as long as they're running. In a typical scenario, in a managed, autoscaling instance group, you would have atleast one VM running all the time to serve the requests (as opposed to scaling them from zero on-demand which in the case of VMs would take seconds, if not minutes, to serve the first request). If your application serves people from around the world with multi-millions of requests per day, it might be worth it to use VMs. Use the Google Cloud Platform Pricing Calculator to find out.

On GCP specifically, using VMs has one advantage in the form of them being in a VPC. A VPC is pretty much a standard network with subnets, and is meant to be used for the internal communication of Compute services within GCP. Since the VMs are in the VPC network directly, they do not need a Serverless VPC Connector to connect to other internal resources. Such internal resources might be a Memorystore (Redis) instance running for your caching needs, and that is only accessible through an internal IP which is in the VPC as well. The Serverless VPC Connector has some minimal pricing per month, but it's still more than just not needing to pay for such service thanks to using VMs that are in a VPC themselves.

There are several details that you will have to manage when using this setup as opposed to just using Cloud Run:

There are some things you will also have to manage, but only if you're not going to be using the Container-specialized OS by Google or other OSs provided by default, and that is the "Guest environment":

There are two things that need to be done in order to even have a deployment in the first place, which can subsequently be very easily automated.

First, there's the infrastructure, beginning with the GCP project to contain all the resources, and then Cloud Run, etc. itself.

The most common tool to maintain cloud infrastructures currently is Terraform.

Terraform is a IaC (Infra as code) tool which reads resource definitions - which are written in HCL - and deploys them on the Cloud platform one desires.

There isn't a correct way to write Terraform code, but there are best practices.

In the case of Cloud Run, or most GCP services, you could either use...

The example below contains the three resources required for a basic, public Cloud Run service, with input variables so that the code can be used as a module.

description = "The GCP project's ID to deploy resources to"
}

description = "The GCP region to deploy resources to"
}

description = "The name of the Cloud Run service"
}

description = "The URL of a container to deploy the Cloud Run service with. E.g.: gcr.io/cloudrun/hello"
}

description = "Allow unauthenticated connections (if false, only users in the project's IAM with the proper permissions can connect to the service, via IAP)"

description = "The port number to send requests to the container on"
}

To deploy the infrastructure above, you'll need

If you do not have a preferred pre-existing way of automatically building your container images, consider using GCP's native tools to do that.

And then you can create a Cloud Build trigger

This part is sort of optional, and it's mutually exclusive with the "Building containers standalone" section above. You can deploy the container images to Cloud Run by supplying a new link to the container to Terraform when deploying through that.

If you don't want to do container deployments via Terraform, you can also use Cloud Build, though this time it's a bit more involved.

Your Git project has to contain a file called cloudbuild.yaml, which should look roughly like this:

If you look at each of those steps, you'll find out that they're just normal CLI commands, such as docker build -t [gcr.io/example/app](<http://gcr.io/example/app>) ., gcloud run deploy visionary-app --image gcr.io/example/app, etc. You can run those on your own machine, as long as you're sufficiently authenticated.

Some variables, such as $PROJECT_ID, are in each build by default. Link

Other variables, specifically those that start with a _, are user-supplied. (note: user-supplied vars have to start like that).

When creating a trigger in Cloud Build, you'll need to supply the values.

Skip this part if you don't use the Go language.

Utilise the power of the Go toolchain, which by default builds apps as statically linked, which means they can run without the presence of libraries - or really anything other than Linux itself, meaning the Container is tiny.

In the file below, you can see that Git is installed and that go.mod and go.sum are added, but in the resulting container - after the FROM scratch line - there'll only be SSL certificates and the single binary that is the app itself.

# This Containerfile will result in a minimal container in the end.

# Copy over the app, which is statically compiled by default during go build.
COPY --from=builder /go/src/app/app /app

Otherwise a new revision won't be created, and you might just find out that your new app changes have not made an appearance.

Cloud Run always serves requests from the container one exactly one port. That port number has to be set on the infrastructure, and the app has to listen to it.

The app should listen to whatever number is defined in the PORT environment variable, i.e. it should not listen on a fixed port. You can ofcourse set a fixed port number if port is not defined.

In the end, you should have a Cloud Run service. In the resource page, you can see an automatically generated link to your service - it ends with .run.app.

You can see that we can see all sorts of metrics, you can go check the logs, etc. etc..

The automatically generated URL is not really a sight to see. You can assign custom domains to your services. You'll just need to verify that you own the domain and assign some DNS records.

Let me know if you need anything via ask@revolgy.com.
Cheers, Ruda.

Rudolf is a high-level cloud architecture design specialist, DevOps expert for cloud environments and a Linux enthusiast. He has a wide experience in provisioning, containers, Kubernetes, CI/CD, automation, bare *nix environments, and migrations to the cloud. At Revolgy he works as a Cloud Engineer.

Is your Google Container Registry filling up, taking up storage and becoming expensive? How to... 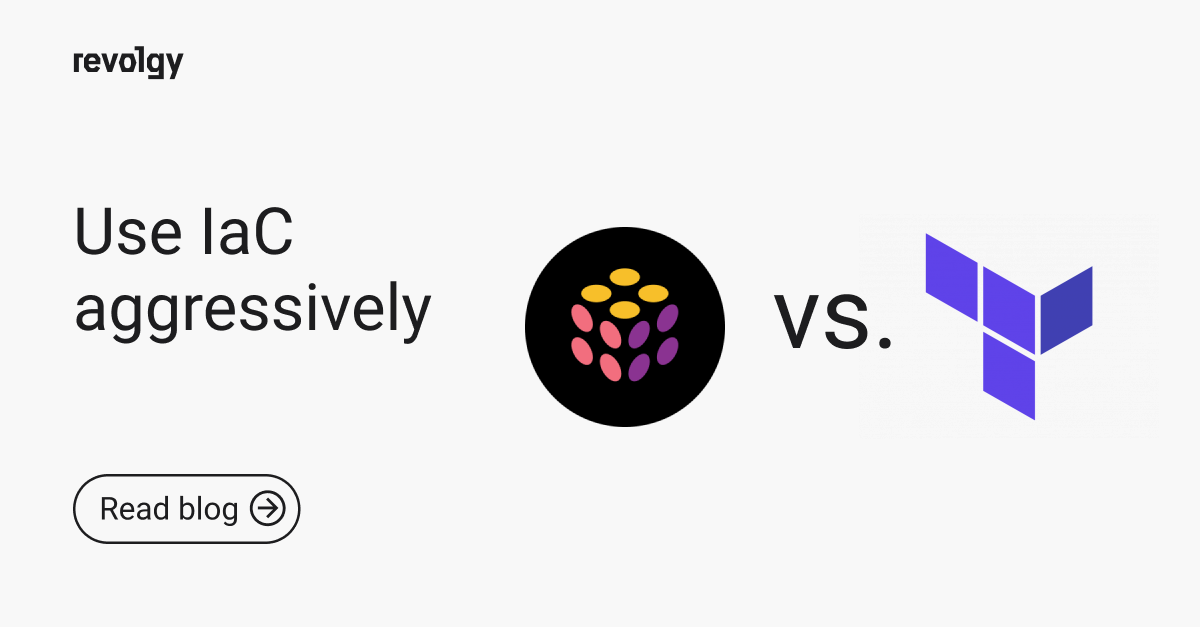 We're already using IaC, how is this different? More often than not, when we or our customers use...